One of the greateast mythical places! History has stopped many times at Chinon. Just think about it and marvel before this formidable Fortress. It occupies a rocky outcrop above the city, the Plantagenet Royal Fortress was the centre of the Kingdom of France, birthplace of Rabelais the great humanist and  let it not be forgotten that Chinon is the most important designation of Loire red wine …

One date amongst many stands out… March 9th, 1429, as the sun was setting… “l was present myself in the town and in the château of Chinon and I saw her when she presented herself to his Royal Majesty with great humility and sim­plicity, the poor little shepherd girl”, wrote Raoul de Gaucourt, Governor of Orleans. The poor little sheperd girl was Joan of Arc.

The history of the Fortress of Chinon, the best protected in Touraine began well before the meeting of Joan of Arc and the Dauphin. This stronghold, first Neolithic then Gallic, a Roman fort and then medieval Fortress belonged to the Counts of Anjou. Anjou, at that time, was allied to the English throne. After falling into the hands of Henry II Plantagenet, Duke of Anjou and King of England, Chinon became his Royal Seat. Henry II was a builder King (he covered Touraine and Anjou with Romanesque churches with domical vaulting, the famous “Plantagenet” style) an astute politician with a good sense of strategy. When he married Eleanor of Aquitaine, whom Louis VII had repudiated, her dowry gave England the whole of the Southwest of France, and he became more powerful than his suzerain, the King of France. Powerful as he was, however, he could not prevent his own son the famous Richard the Lionheart, from waging war upon him on the 6th July, 1189. He was abandoned by all, even betrayed by his children.

The King is dead!

On the 7th July 1189, Henry II, Duke of Normandy, Count of Anjou, Duke of Aquitaine and … King of England breathed his last breath at Chinon, his favourite residence. He was 56 years old and he died of grief. His eldest son, Richard the Lionheart, had declared a bitter war on him and his youngest son, and favourite, King John had betrayed him. No sooner did give up the ghost than his heirs looted his furniture and personal belongings, leaving him naked on a table. It was a young pageboy who took pity on him; he threw a cloak over the body. The body of Henry II of England and Count of Anjou, one of the most powerful man of his time, was lying miserably on a stretcher. As to the Royal Treasure, it was never found. Richard the Lionheart, who rushed to Chinon as soon as he heard the news, met the funeral procession as it was leaving Chinon for the Abbey of Fontevraud. The corpse which was not placed in a coffin, was bleeding from the nose, a bad omen! Ten years later it was Richard’s turn. He was wounded at the siege of Châlus, and taken to Chinon, where he died.

The English driven out of Chinon

A quite ordinary (!) assassination was to change the course of his­tory and return Chinon to the French. Henry II’s second son, John Lackland, who was married to Isabelle d’Angouleme, had plotted the murder of his nephew, Arthur of Britanny. For that he was condemned to give back all the fiefs he held from the French Crown. This enabled Philippe Auguste to expulse the English from Chinon once and for all and to occupy the castle himself. The new master altered the architecture of the Fortress to make it even more military than before: he added the Coudray Keep, which is 25 metres high.

A little over a century later in 1307 and 1308 Philippe Le Bel, King of France, turned the Dungeon at Coudray into a prison for major dignitaries of the Order of the Temple, before they were transferred and burned alive in Paris. You can see moving messages left by the Templars on the walls of the tower (in 1308, Jacques de Molay, the last Grand Master of the Knights Templar, was held prisoner in the castle during the Trials of the Templars). And what about the crime committed at Chinon during the reign of Philip the Long a few years later? One hundred and sixty Jews were burned, unjustly accused of having poisoned the wells.

Jeanne in front of Chinon

On March the 6th 1429 at “high time”, just as the sun glows on the hori­zon, Joan of Arc and Robert Baudricourt appear before the formi­dable Fortress of Chinon, three castles separated by ditches and a fantastic fortified enclosure 400m long. They only had to cross the bridge over the Vienne. Suddenly Joan stops dead, petrified to continue. Would she, a simple shepherdess, be able to con­vince the man they derisively called the “Little King of Bourges”?
“Go boldly”encouraged a voice, “he will receive you and believe you!” So, with a firm step, she crosses the bridge. The small troupe enters the enclosure through the fortifications of the Fort St. George. Then she crossed the drawbridge and arrived at the Middle Castle, home of the heir to the throne, by the Clock Tower. Did she, innocent Joan, realise that she was about to meet a man scorned and challenged, who doubted his own origins, the future Charles VII? France, at the height of the Hundred Years War, was
partially occupied by the English, while a civil war between Burgundy and Armagnac was ravaging the country.

Louis de Bourbon, Count of Vendome, Grand Master of the King’s house was waiting for her. At the sight of this young girl wearing the rough black clothes of an equerry, he believed that it was a trick. Negotiations lasted two days. Charles did not wish to receive her, fearing a trap. Finally, the hearing is held in the great hall of the Royal House (now in ruins). It is a huge room, 90 feet long by 50 wide, lit by fifty torches. Three hundred gentlemen are crammed in. Joan advances alone, they only just about let her pass. Everyone is pushing and shoving to see her. Whipping people aside the bailiffs open a path to the throne. This is when something extraordinary happened. Instead of going towards the Royal dais, where the Count of Clermont is standing, she goes towards a gentleman in the crowd. At a spear’s distance, she kneels. Silence falls, the crowd is stunned. The crowd can hear the crackling of the torches: “God give you long life, kind Dauphin. -It’s not me, he said, pointing to the Count of Clermont. –In God’s name, it is you and not another.”

To crown him at Reims

Charles is stunned. Joan tells him that her mission for that day is to crown him at Reims, in private, a secret that would never be revealed. The Dauphin convinced, offers her whom is already being called the Maid of Orleans, armour and a small band of soldiers. Orleans under siege since October 1428 and her people were starving. Dunois begged her to go with him to lend a hand. Joan enters the city by surprise at the head of a supply convoy. May 8th 1429, the City was liberated. The Dauphin can finally leave Chinon.

This telling of the recognition of the Heir to the throne by the maid of Orleans in the great hall of the Royal residence in Chinon, in front of his entire court is not entirely accurate. In the records of her trial, Joan stated that she had met him previously. Their first meeting was in secret in the King’s chamber, thanks to Joan’s powerful protector Yolande of Aragon, whose daughter, Marie of Anjou, had married Count Charles Ponthieu (heir to the throne) seven years earlier without ceremony. So Joan had no difficulty that day in recognising the future Charles VII.

An apt setting for Gargantua

In the 15th century it was at Chinon that the annulment of the marriage between Louis XII and Jeanne de France took place, ena­bling Louis to marry Ann of Brittany. In 1493, or perhaps 1494 the wife of one Antoine Rabelais, a man of law attached to the Royal Seat at Chinon, gave birth to little François, literary Father of the giant Gargantua. He is supposed to have been born 5 km away, at La Devinère, where his father had “a house in the fields”.

Charles VII returned regularly to Chinon with his court up until 1447, to the point of building a small house (known as the Roberdeau) for his favourite, Agnes Sorel. During the seventeenth Century, Cardinal Richelieu and his heirs became owners of the castle. They left it to fall into ruin, so much so that there was even talk of demolishing it. In 1808 after the Revolution, the monument was donated to the borough council (today known as the general council). In 1854, Prosper Mérimée saved it from destruction and
the first restorations began. In 2010, after six years of excavation and six years of site restoration unprecedented in Europe, Chinon has given its Fortress its military splendour and coherence of days gone by.

Three Fortresses in one

Listed as a UNESCO World Heritage Site, the Royal Fortress of Chinon is one of the few medieval sites in the Loire Valley. The Castle is built on 3ha of rocky spur 400m long over­ looking the Vienne river. On three sides there are steep cliffs. The Castle, of which only ruins are left, is composed of three Fortresses separated by deep dry moats. 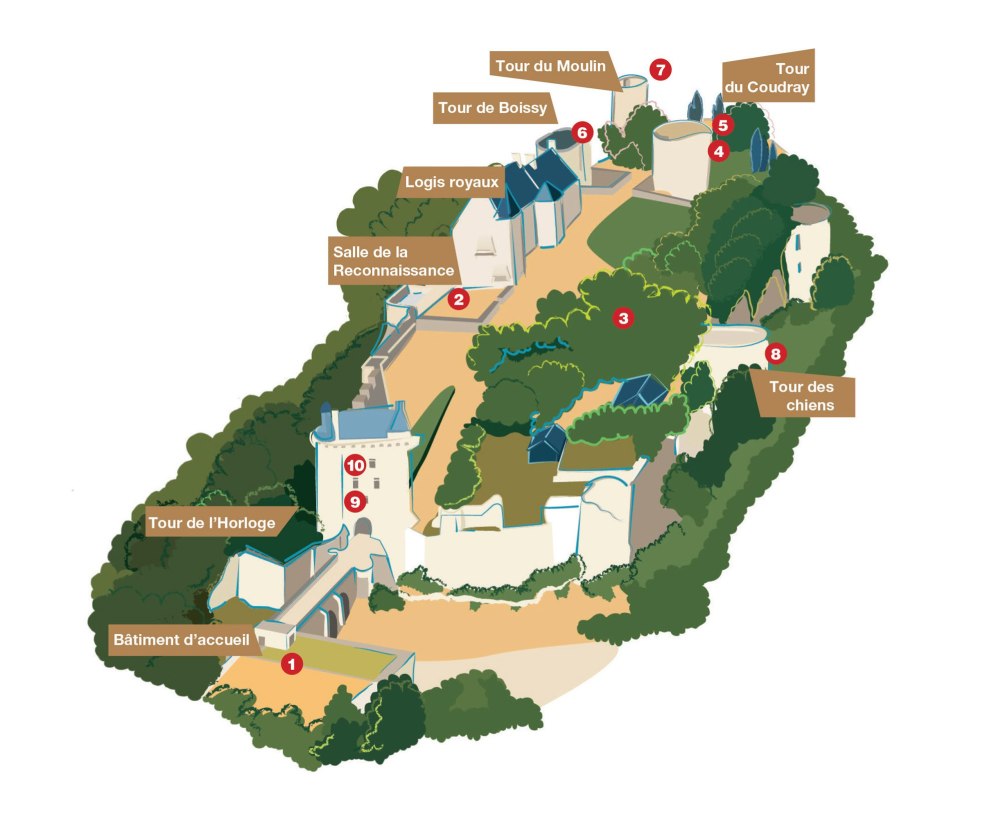 Just across from and to the west of the medieval Fortress of the Château de Chinon, the Clos de l’Echo is the best known vineyard within the entire Chinon appellation* taking its name from the echo transmitted from the northern cliff of the Fortress. The legend goes that doubtful lovers would tease their maidens by shouting a pair of leading questions: “Les femmes de Chinon, sont-elles fidèles?” “Elles” asks the echo. “Oui, les femmes de Chinon“. “Non” says the echo. The Clos de l’Echo, 100% Cabernet Franc was once owned by François Rabelais’ family. In 1952 it was bought by René and Madelaine Couly.

*AOC Chinon is the most important designation of Loire red wine (15 millions bottles per year): red (85%), rosé (13%) and white (2%). Vineyards are present in 26 villages, to the south west of Tours. The various wines of Chinon are grown on alluvial terraces, hillsides and limestone hills overlooking the Loire and the Vienne rivers, or on plateau of flint and clay. The Cabernet Franc grape, the “star of Chinon” is locally called “Breton”.

A selected bibliography of the Author (6 books by François Collombet) : 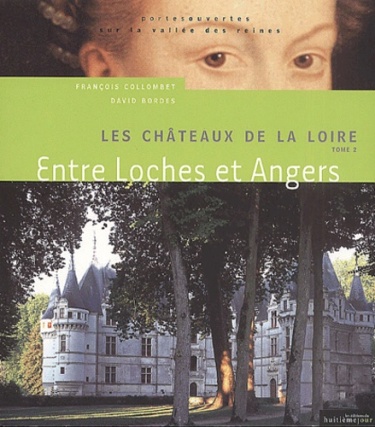 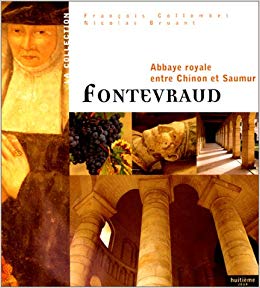